I didn’t spend a lot of time at the museum but thought I could get this hour’s photo of someone looking at an exhibit. I took a couple of photos of people walking through the main activity area from above but I didn’t really like them.

I had a quick look at the 10 Objects: 10 Stories collection, which is a temporary exhibition showcasing objects from some of Tasmania’s small museums and collections, and then went to the Modern Age gallery. I like looking at the 20th century Tasmanian collection and took a sneaky photo of a guy looking at one of the exhibits in there.

After that, I decided I didn’t want another museum photo so I left and headed back down to Salamanca. The homeless rally was packing up, as were most of the stallholders, so I repeated what I’d done this morning with them setting up. 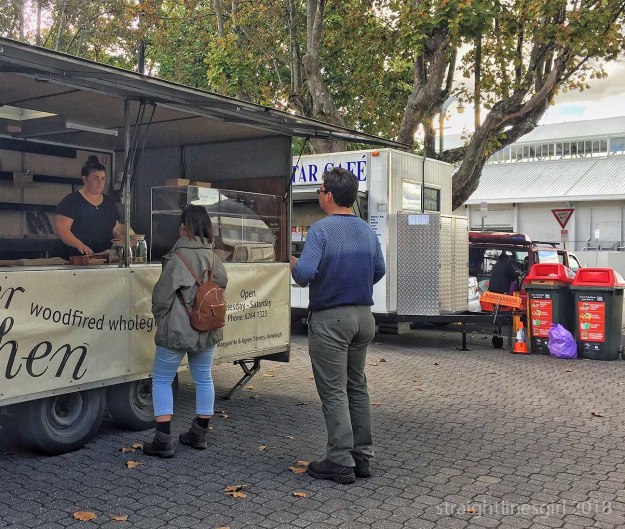 It was coffee time. I usually have two coffees in the morning and that’s it for the day but I hadn’t had my second one and I felt like sitting down for a bit so I did. I was tempted to have a hot chocolate but sugar-free me said no. So coffee it was. And more water. Good.

I’d done my market packup shot already so didn’t want to stick around Salamanca. I saw a group of people standing round looking at their phones in the square so I thought that might make an okay shot.

This project wasn’t an excuse to not post my black and white photo for the day so I wandered around the waterfront for a bit looking for something to post before walking back into the city. I really wanted a parking inspector photo, which I should have probably done earlier in the day. I saw one but I would have had to turn around and follow him and that felt a bit stalky.

I let several potentially good photo opportunities pass me by as I didn’t have my phone out and I realised that for this type of photography you need to be ready to shoot something instantly because you might only have a fraction of a second to see it, react and shoot. You also have to decide to do it and do it, not walk back and forth past the scene with indecision. Do it or don’t do it, and move on.

And it was this mindset that I stopped and snapped a shot of a nail salon, which ended up being the 4.00 photo. I’d hoped it would be the 3.00 photo, but I was too late for that. In hindsight, I’m glad because I ended up liking the photo I posted for 3.00.

I also wanted to photograph some more street corners for the street corners project as I don’t often get into town on a Saturday and they look quite different from the way they look during the week. I ended up at Hobart Brewing Co and sat down with a refreshing beverage to write some notes. Not surprisingly, because this is Hobart, one of my workmates was there with some friends and came over to find out what I was up to.

Soon it was time to go back up to town to find the 5.00 photo. An hour really isn’t a long time.

My first picture was inside a cafe. It was the early in the hour backup photo. I don’t think it’s too bad for a walk-by, notice, stop and shoot picture.

I saw the guy on the bike talking on the phone. He was standing still. I could pretend to be taking photos of the bank and he could end up in one of them.

It’s funny because most of the time I’m taking photos of buildings and I don’t want people in them. But there I was trying to focus on the people, not the buildings. I kept getting drawn to the buildings, wanting to photograph them and wishing the people would hurry up and get out of the way. I had to keep reminding myself that the people were the subjects today.

After I had finished photographing the bank, I mean the guy outside the bank, I walked up Elizabeth Street. I wanted to capture the corner of Elizabeth and Warwick Streets while it still looks like it does now (Saturday 7 April 2018, 5.32 pm) as I understand there is a development proposal for the site that would change this view significantly.

Shambles Brewery beckoned on the way back, so I took the chance to sit down again and write some more notes. It was starting to get dark and I was wondering if this was the time I might start to wish I were doing the project with someone else. The project organisers suggest doing it with friends but, until now, I had been perfectly happy with my own company, doing my own thing, going wherever I felt like going.

I wasn’t sure if the darkness would change that. I didn’t think I’d feel unsafe. I never have walking through Hobart at night. But I wondered if boredom might kick in when there wasn’t as much to see and internal areas of the city started to be closed off and the people went home.

Of course, there were people starting to come out as well, so I was just happy to take whatever happened as it came.

And what pub stop wouldn’t be complete without the following conversation, based on the shirt I was wearing (a Samedog original):

I figured out who he was a bit later on.

My next stop was the mall again. I thought I’d sit for a while and try to capture people walking past. It wasn’t super busy, as I expected but I did get a couple of shots. This was the best of them. (Says a lot for the others, doesn’t it?)

I was starting to feel uncomfortable about doing this. Hobart isn’t a big place and, as evidenced by the above conversation, you could run into someone you know or who knows who you at almost any time. I know that there is nothing to legally prevent me from taking photos in a public place and doing whatever I want with them, but it still felt intrusive to be capturing people walking past and instagramming them. I was in two minds about phone guy and even more so about these two. Then I started to second guess myself about the nail salon and basically every other photo I’d made today and posted where the person might have been identifiable.

I wasn’t sure where to go from here.

I remember wandering around to the bus stop and seeing some girls sitting there and half thinking they’d be good subjects but again the obviousness and awkwardness put me off.

I eventually wandered down Murray Street to the waterfront. Town was pretty dead; here was where everyone was going.