Hour 15: 7.00 pm to 8.00 pm
I had no intention of leaving Salamanca but I saw some people come out of the laneway that led to Kelly Steps and thought it might be fun to explore there. Dark laneways. What could possibly go wrong?

When I got to the top of the steps all I knew was that I was in Battery Point and that all roads led to Sandy Bay. I passed a couple of groups heading out but it was just too dark to take any photos so I kept going with no plan in mind other than knowing I was heading away from where most of the action would be.

I passed the Prince of Wales Hotel and tried to go for one of those trendy photos of patrons through the window. I would have walked past on the same side of the road, except people were sitting outside and might have noticed someone lining up photos out the window so I had to settle for across the road. 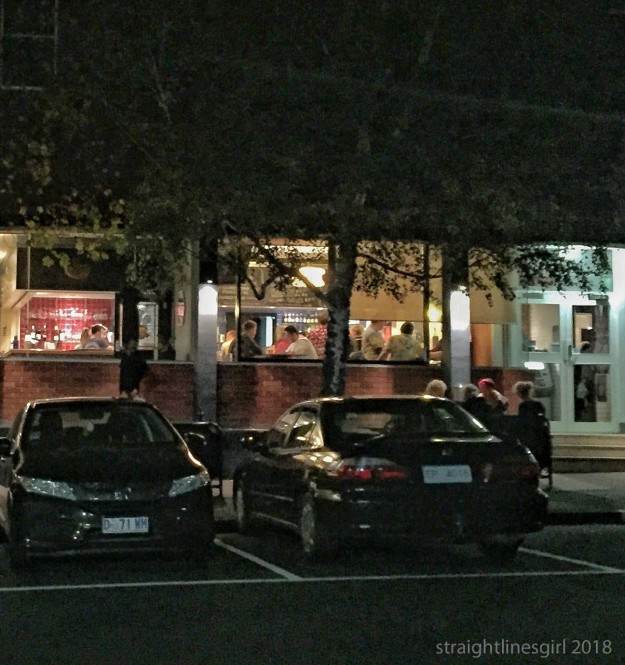 There’s a definite theme here isn’t there, and the limitations of a phone camera in low light and from a distance are fairly obvious.

I decided to keep going to Sandy Bay, get something to eat and then decide what to do after that. The next bus would be at 8.10 and I wasn’t exactly sure where I was or how to get to Sandy Bay. I just kept walking because every other time I’ve ended up in Battery Point I’ve just kept walking and eventually found somewhere I know. It’s never the same and it’s always a bit of an adventure for me. Even more so in the dark!

I made it to Sandy Bay Road eventually, as I’d known I would. It’s a big road. All roads in Battery Point lead there. Almost.

If it’s possible to have a favourite service station to photograph, the Shell on Sandy Bay Road is one of mine. I’m sure it violates all service station etiquette to be taking pictures of them on your phone but I think they’re a goldmine of opportunities for people who know what they’re doing. 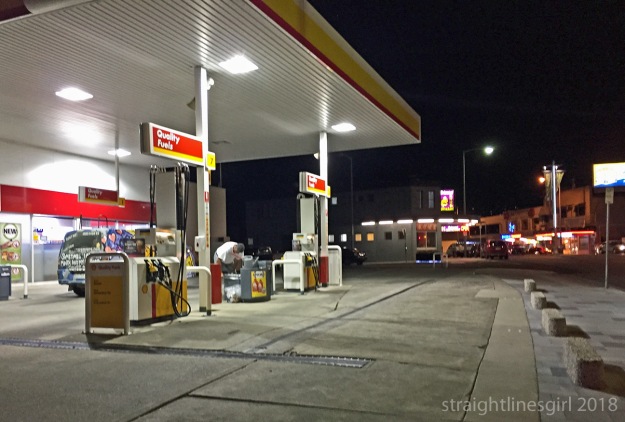 The big lesson from this photo is probably that it’s okay to actually stop and take a breath before taking the photo rather than stopping, snapping and continuing to walk all in the same moment. I should do this more often just to get the practice.

I went to the Taproom in Sandy Bay for a burger and drink and a chance to sit. I was the only person there. It was nice. And quiet.

I was finishing my drink and watching the guy behind the counter. I thought it would be cool to get a photo of him at work, but again it felt intrusive. I sat and debated with myself whether I should ask him if I could photograph him for the project. Finally, when he came to collect my plate, I pulled myself together and asked if he’d mind if I took a photo of him working. He was very cool about it and agreed, and we had a chat about the project and about social media in general. 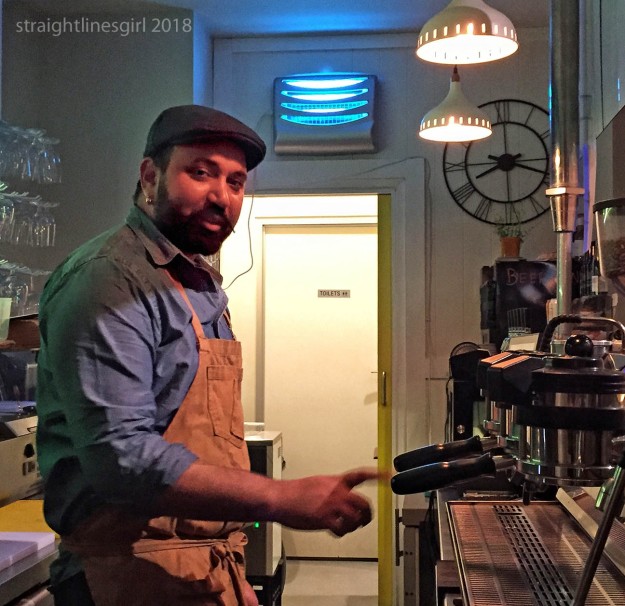 That was one of the hardest things I did during this day and, even though the photo isn’t very good, it reminds me that I can approach people I don’t know and ask for something. And sometimes they will say yes. And for this reason, I like this photo.

I had missed the bus home. The next bus was an hour away, which meant I had a chance for a 9.00 photo. And if I made a 9.00 photo there would only be two hours left in the project, so it seemed a bit silly to abandon it so close to the end. I suspected that I knew I’d reach this decision way back when I started. I was going to see this through to the end.

I started walking back to town.

The bus stop photo was always intended to be part of this project. There’s always people at bus stops. There’s my early hour photo. What to do now? 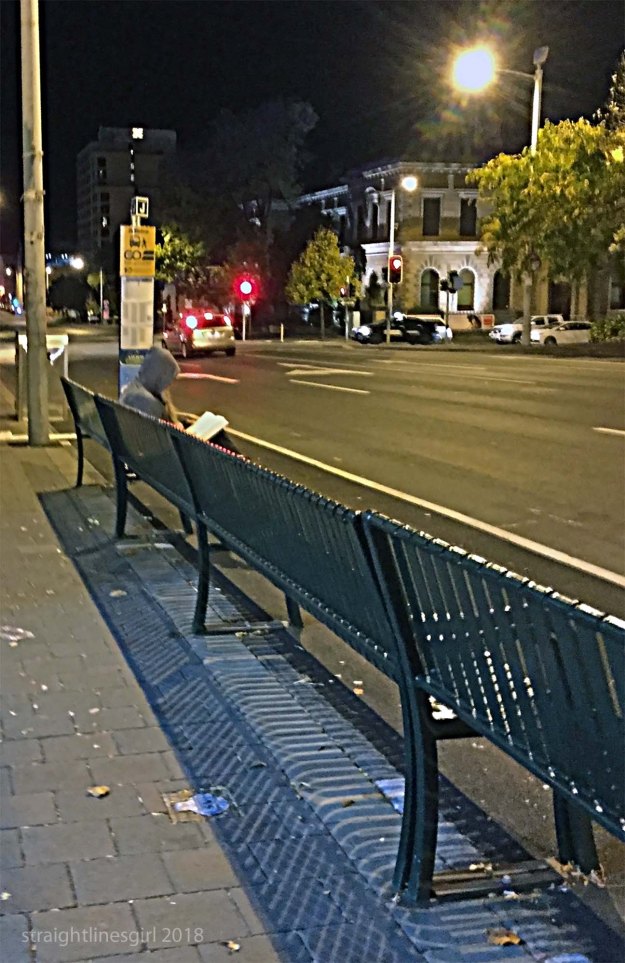 I turn the corner and a lady crosses the road and strides onto the footpath in front of me. She’s talking on her phone and she seems in a hurry. A quick photo before she’s out of sight. 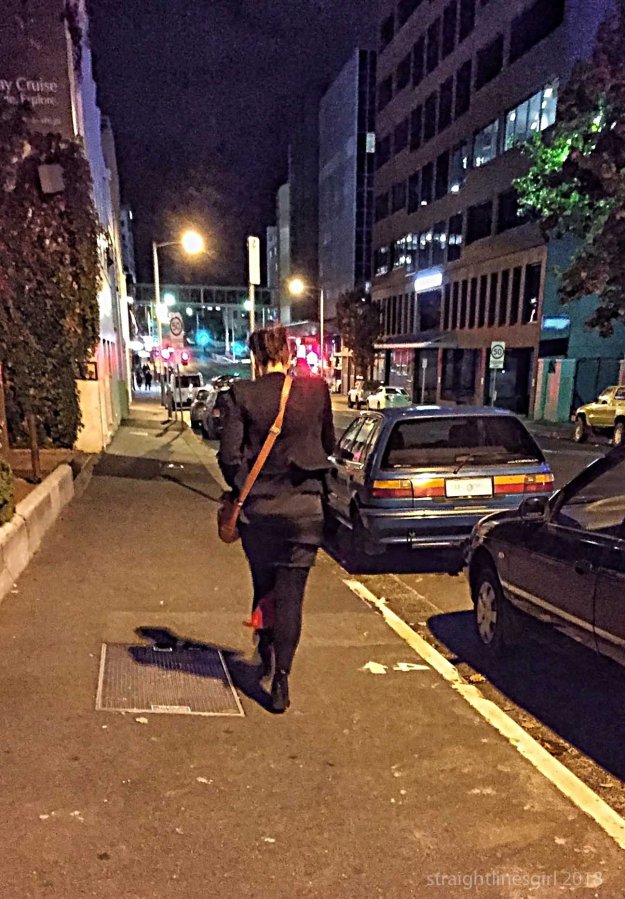 It was dark and there weren’t many people around. They were all down at Salamanca. I wasn’t overly enthusiastic about going there, but I still had two hours.

I started thinking that I was still feeling okay after having got up at 4.45 am and started walking just after 5.00. I wondered if I’d be feeling this okay if I’d started at midnight, and my thoughts turned to whether I could actually do that. Already I was planning how it might work, who I could enlist to bring me supplies during the day and who might live close enough for me to sneak a nap in during the day and charge my phone.