I love the T&G Building on the corner of Collins and Murray Street. I don’t know a lot about it, other than it was one of several buildings constructed for the T&G Mutual Life Assurance Society in Australia around the same period. Most of these buildings were designed by the Melbourne architectural firm A&K Henderson, which was also responsible for a number of other landmark buildings in Hobart including the building that now houses Dome cafe on the corner of the mall and Collins Street, and the Hobart Council Centre, formerly the Hydro Electric Commission, on Davey Street. 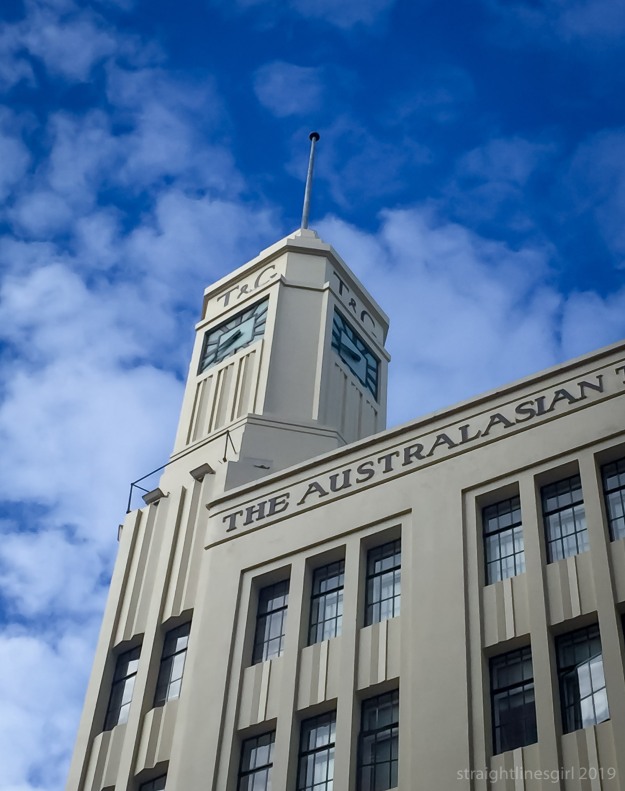 Many of the T&G buildings were a similar Art Deco style as Hobart’s T&G and featured a similar clock tower.

According to the sign across the road that gives some of the history of the building, the 1945 City of Hobart Plan recommended that the height of this building should not be exceeded in Hobart’s CBD.

I guess they abandoned that recommendation pretty quickly because by the end of the 1960s there were several taller buildings dotted around the CBD, including AMP (now NAB) House (1968) and 10 Murray Street (1969), to be followed by more in the 1970s including T&G’s neighbour over the road, the distinctive Jaffa Building (1978).

According to a plaque on the wall, the building was significantly refurbished in the early 1980s. The ground floor of the building has several shops and there’s an open linkway between Murray and Collins Street that houses more shops, and the lifts and the stairwells to the businesses on the upper floors and lower. I believe that some of the top floors are residences. At least there’s one. The penthouse apartment on the top floor recently sold for over $1 million.

If you go into the linkway, you’ll find a plaque commemorating the completion of the building in 1938.

When I first saw this, I thought, oh yeah, 1938, it’s not that old. It’s a pretty modern building. But, as I walked on, it dawned on me that the 21st century is nearly 20 years old and that, therefore, this building is over 80 years old. It’s not exactly a young building. (I think that in my mind, nothing has aged since the year 2000, which is why I get such a shock when I see people I met when they kids in 1996 drinking in the pub and turning 21. I genuinely imagined the building was only 60 years old.)

Reflecting on the age of the T&G Building made me recall a comment on an internet post reporting on a building of a similar age in another town that burnt down not that long ago. The person had said that it wasn’t that great of a loss because it wasn’t like the building was 150 years old.

That made me scratch my head. It seemed to be a very now-centred perspective. What I wanted to ask this person was, how do you think a building gets to the age of 150 years if it’s not left alone at 80 years?

That’s the first reason the comment made no sense to me. The second question I thought of was why would a 150-year-old building be more valuable than an 80-year-old building just because it’s older? The comment implied that if the same building had been 150 years old it would have been sad to have lost it but because it was only 80, losing it was no big deal.

Did the person mean that the longer a building has been standing, the more unfortunate its loss would be? That seemed to be what they were saying. If the building had burned down in 2088 rather than 2018, it would have been a greater loss because it would have been older. I could only assume that this person places greater value on older buildings, for no reason other than they’re old. I didn’t understand that either.

Using this logic, a building isn’t valued because it’s not very old, say 80 years in this case, but at some point it must become old enough that people look at it and say, yeah, that’s important and we need to preserve it. But who’s to say where that point is? If it has to be older than 80 when is old enough? 100? 120? 150? It doesn’t make any sense. If an 80-year-old building isn’t important or significant or valuable now, how it is it that the same building suddenly becomes important or significant or valuable some time within the next 70 years? It can’t be just because it’s achieved the status of “an old building”.

I’d like to think that significance, value and importance have nothing to do with age. I’m sure there are some ugly 150-year-old buildings around that have ended up being preserved primarily because of their age, while there are 80-year-old (and 50-year-old and even 20-year-old) buildings that are deemed expendable because they aren’t very old and haven’t yet reached that point where their significance has been acknowledged—and it never will be because, by the time it would have, the building is long gone and it’s too late.

Dirk Bolt, the original designer of one of those 50-year-old buildings that didn’t survive, speaking about that building before it was demolished, observed that this is exactly what happens.

“It is in a phase where buildings are seen to be too old to be adequate for their task and too young to be part of a significant heritage,” he said. “However, this phase is temporary and demolition denies future generations to judge for themselves.” (The Mercury 21 October 2009) 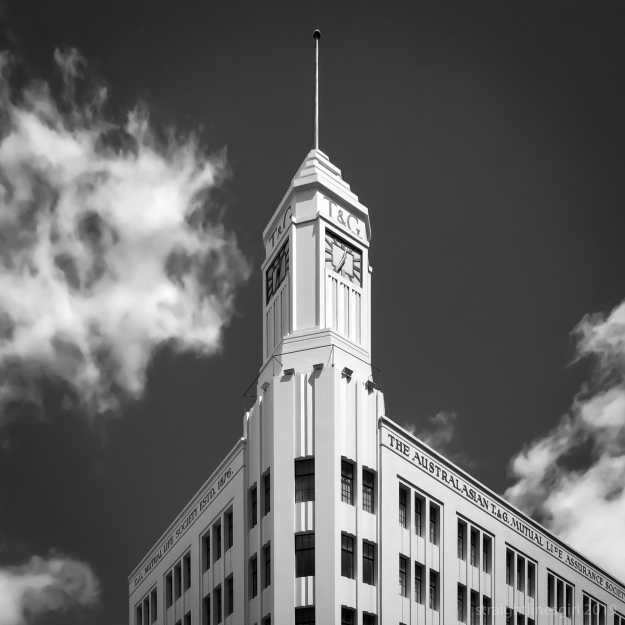 Often, we don’t appreciate our more modern buildings and don’t put in the effort to preserve them now so that they will still be standing when they’re 150 years old and future generations make that call about whether they are significant. But if we continue to focus on age as a measure of value or importance or significant, many buildings have to wait until someone in the future judges them to be significant—if they survive that long, which a lot of them don’t.

So far, the T&G building has escaped any such debate. People seem to like Art Deco more than many other 20th century styles, which I’m sure helps. I’d say it’s a Hobart icon and I can’t imagine anyone succeeding with an application to knock it down and replace it with a high-rise tower. It’s on the Tasmanian Heritage Register for a start.

Though you can never be too sure. T&G in Townsville, which had a similar design, was on the Heritage Register. It was smaller and built later than Hobart’s T&G and was demolished in 2008 to make way for an office block. This building had been removed from the Heritage Register on the grounds that it had no architectural or cultural heritage significance. Having been designed in Melbourne by our friends A&K Henderson, it was deemed to be an inappropriate design for tropical Queensland and, consequently, was a structural mess that would have been difficult to restore and maintain. (The decision is an interesting read.)

And specifically being an Art Deco building on the Heritage Register won’t necessarily save you either, as the former government printing office in Salamanca Place found out when the Tasmanian Government brutally made legislation that permanently removed it from the Heritage Register so it could be demolished.

No, just being Art Deco isn’t enough. Just ask this building in Macquarie Street that was killed in 1985 and I think is now the Grand Chancellor. (Paul Johnston sums up the dilemma well in this article, where he says, “the generation that creates something is never the one to appreciate it”.)

I wonder what people will make of T&G when it’s 150 years old. I hope they’ll appreciate it as much as we do now. I also wonder if people will still be as obsessed with preserving old sandstone buildings as they are now and if they’ll regret the choices made today to remove some wonderful newer buildings from our streets. (Actually, I really wonder if half of Hobart might not be underwater by then and if preserving our built heritage will be the least of our concerns, a worry long since forgotten.)

Amazing where looking at a simple plaque inside a building can take your mind. For now, I will continue to enjoy photographing T&G and its many angles and intricacies because it really is a delight. And next time I might even take my camera instead of my phone!

1 thought on “An old building”