My Open House Hobart adventure continued with my sister after our visit to the Jarvis House and lunch. We headed back to town to find some more buildings before our 4pm tour. 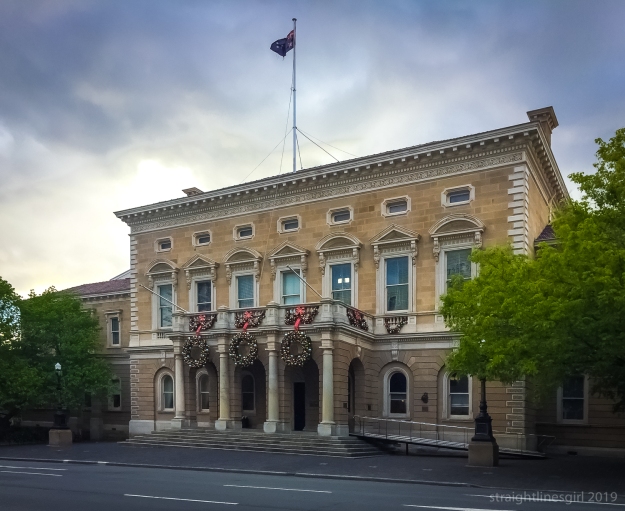 Town Hall, Macquarie Street. This photo may have been taken in a hurry on my phone when I realised I had heaps of photos inside the building for this post but none of the outside.

We started at Town Hall on Macquarie Street, which was designed by Henry Hunter and opened in 1866. The basement space, known as “The Underground” was also open so we went there first. 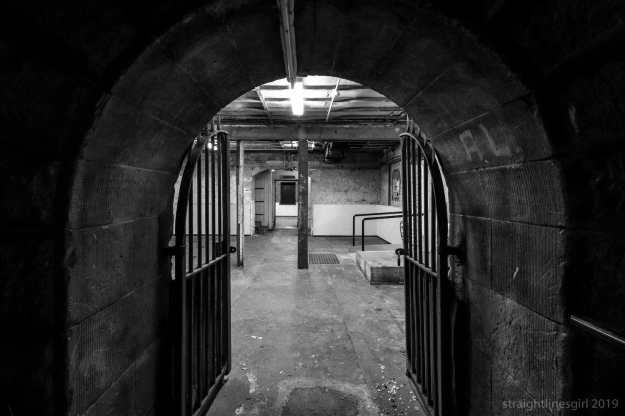 Underground, Town Hall. I wonder who A L was.

There was a flower show in the main hall so it wasn’t possible to take any photos that showed the room, but we got to see the council chambers and pretend to be Lord Mayor, so that was fun.

We spoke to a lady who was visiting from Brisbane and she told us how great it was that we still had so many of these old colonial public buildings in Hobart. She told us about Brisbane Town Hall, which was build in the 1920s and sounds amazing. If I ever go to Brisbane that is definitely on my to-see list.

We then ventured around the corner to the Maritime Museum in Argyle Street, housed in the Carnegie Building. It was formerly the public library and was badged as the State Library of Tasmania in 1944, before the state library moved to its present location in Murray Street.

There was a great photo of the building, when it was still the library, which demonstrates that sometimes cars parked in front of buildings, much as I hate them now, are a good thing because they provide a way to date the photograph and a window onto what the living streetscape looked like many years ago. Perhaps one day I will look back on my own photos of buildings with cars parked out the front that really annoyed me at the time, and appreciate the history I have documented.

This picture shows the Argyle Street side of the building. There is now an inconveniently placed tree in front it so this photo can’t be replicated.

We were able to see the caretaker’s flat upstairs and the boiler room downstairs, and the attendant said that the caretaker would have to climb up and down the stairs regularly to make sure the boiler was still operating. That was all sealed up because of asbestos. There was also no bathroom in the flat so we were standing round debating whether the caretaker had a chamber pot or used to have to climb down three flights of stairs every time he needed the bathroom. These are need to know issues!

We didn’t really have time to look around the museum in detail because we had our 4pm tour at the Henry Jones Art Hotel. This is within the broader Henry Jones complex in Hunter Street, designed by Circa Morris-Nunn and constructed out of the remains of the former IXL jam factory. The tour was led by the hotel’s history liaison person, Greg (how do I get this job? does the Supreme Court need a history liaison person? I’m sure they do . . .), who told us the history of the complex, the story of Henry Jones and the philosophy of the art hotel.

I didn’t know anything about the place except that Henry Jones ran the IXL jam factory and that the Peacock and Jones restaurant is very very good. The Peacock in the name is George Peacock, who ran the jam factory before Jones took it over. I love the fact that Robert Morris-Nunn built his own office into the complex. What a fantastic spot to work from!

Turns out an art hotel is, well, a hotel that showcases art. Who would have thought.

Greg showed us through the hotel’s John Glover collection, which is housed in the hotel’s restaurant, Landscapes, as well as their Glover Prize winner collection. The painting that caught my eye was the 2009 winning entry by Matthew Armstrong called Transformed at Night, which shows everyone’s favourite Hobart street, Mellifont Street, at night.

Transformed at Night by Matthew Armstrong in Landscapes restaurant

Upstairs is a function room that used to be the offices of the factory.

Greg told us the story of Henry Jones, whose parents were both convicts, and who started working at the factory as a child and worked his way up to eventually own the company. We heard how hard the work would have been in the factory but how the company had the philosophy of “a job for life” and built a real community for its employees that included things like a band and sports teams.

One of the hallways

We looked at some photos of the site before the work commenced and Greg explained that if it had taken much longer to make a decision to reconstruct the complex, it probably would have all been demolished and we would have lost what is an iconic part of Hobart’s history.

Ceiling in the hotel with a huge Oregon pine beam

It had all been all in a very bad state, but what they tried to do was retain as much of what was remaining as they could and build the new parts so as to reveal what used to be there. So there are beams and pipes out in the open.

Wall in the hotel

One sandstone wall had been rendered over, and they removed a lot of that to bring the sandstone back to life but kept some of the render to tell the story of the history of the wall. 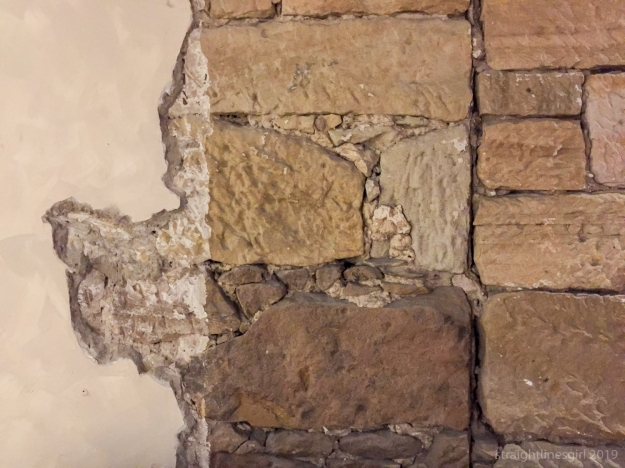 What was, what is, and what was before

The carving on the main staircase up to the office is incomplete and Greg said this was because Henry Jones thought that kind of decoration was keeping people from doing real work, so he stopped the worker mid-task and sent him off to do something more worthwhile.

Stairs up to the function room, Henry Jones Art Hotel

The best part was the story of the decades-old cold jam leaking through the ceilings and walls once the buildings were completed and heated. At first, people weren’t sure what was going on with the smell of jam permeating the hotel and then there were complaints . . .  from people whose room didn’t leak jam!

This has to be the craziest building I have ever been in. It puts whole new perspective on the word “random”. 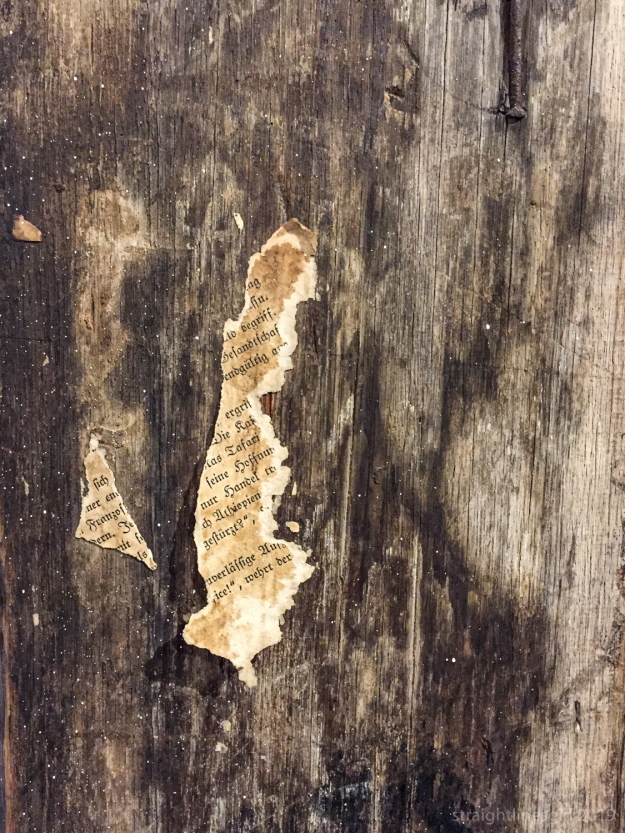 Random fragment of a German newspaper

The contemporary art collection is displayed in the corridors of the hotel and we wandered (quietly) around admiring it.

Looking down on some art

Then it was time for a recovery drink after such a long day before dinner and our final event of the day.

The Dark Sky tour was conducted by Landon from Dark Sky Tasmania, a group that aims to “preserve and protect Tasmania’s might-time environment and our heritage of dark skies through environmentally responsible outdoor lighting”. Landon took us on a walk from Salamanca to the city, explaining why dark skies are so important for our health and for the environment. He said, and this completely blew me away, that six per cent of Australia’s energy emissions comes from inefficient, inappropriate and ineffective lighting.

Six per cent of our total emissions! Think about that.

As we walked, Landon pointed out some lighting and explained why it worked or didn’t work and explained why brighter doesn’t always equal better. Some of the brightest lights make it harder to see than some of the dimmer ones just because of the way they are positioned and where the light goes. There were some very bad examples at Salamanca and in the Parliament lawns, along with a nearby lit up crane and building site.

The steps behind the Executive Building, which are lit with small downlights in the handrails—exactly where you need to be able to see when you’re ascending or descending stairs in the dark—and the lighting in Franklin Square were much better examples of effective lighting. Landon was less complimentary about the Shadforths sign on the building across the road.

The final stop was the Sportsgirl corner on Murray and Liverpool Street, from where you can see four generations of street lighting, ranging from the old sodium lights to the new and very bright LEDs, which, Landon said, don’t light up the places they need to light.

Finally, we walked into the bright lights in Liverpool Street, covered one light with our hands and looked up at the sky to see the one star Landon said we could still see. I couldn’t even see that, but I have crap eyesight, so there you go.

This was an interesting and thought-provoking way to end what had been a wonderful day of exploration, and I will never look at street lighting the same way again. We headed home to get ready to do it all again tomorrow.