On 21 February 2018, I was walking down Collins Street on the way to work. A route I often took. While I was waiting for the lights to change to cross Murray Street I pulled out my phone and took a photo from the corner looking back down Murray Street.

A few people around me started looking down the street I’d just photographed to see what had got my attention. Nothing had. It was just a photo for no reason other than to capture what that street corner had looked like at 8.48 am on Wednesday 21 February 2018.

I posted it on instagram with that explanation as a caption and didn’t think much more about it. 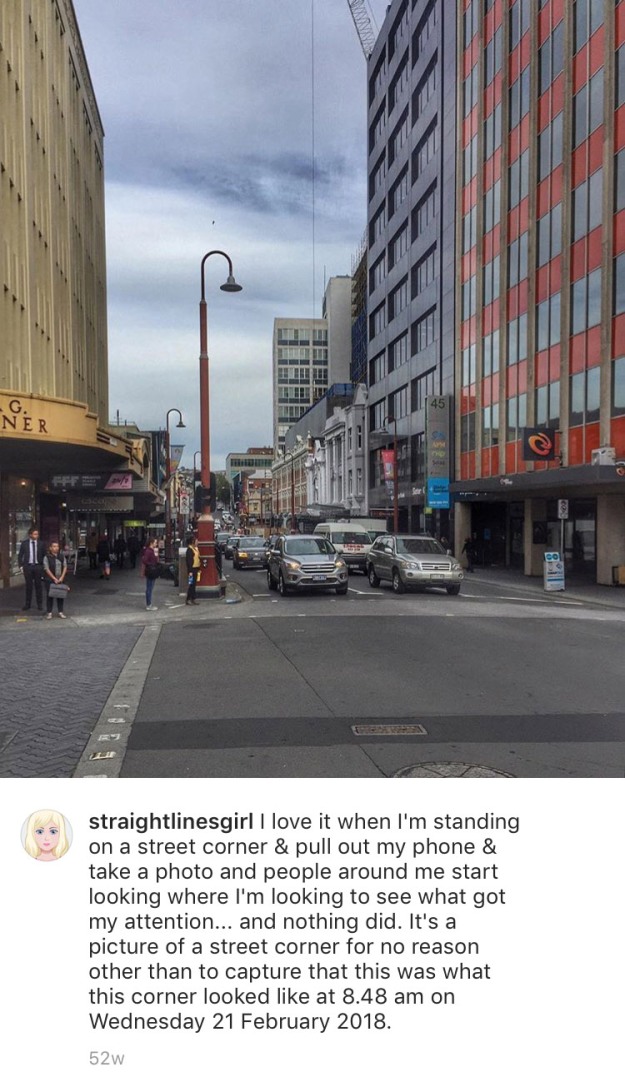 Two days later, I posted a picture of a different street corner and it occurred to me that this could be a fun project: to document the most normal everyday scenes with no aim in mind other than to capture what this moment was like on that corner. I wrote a blog post about it and started posting views of different street corners on instagram almost every day using the hashtags #streetsofhobart and #hobartstreetcorners.

At the start of this year, I decided that the project really had a life of its own so I set up a new instagram account especially for these photos, @hobartstreetcorners, which you can find here.

I thought I should take a photo of the same corner at the same time exactly 12 months later to commemorate the anniversary of the project but I didn’t remember what the original date had been. By the time I looked at the photo to check, it was the day after, so I had missed the opportunity.

I did the next best thing. I went there that day and tried my best to recreate the photo from the exact spot I’d been in the first time. I think I did it pretty well in the end.

As well as the instagram account, I am working on a new blog, The Streets of Hobart, which I’m intending to put all of the street corner photos from 2018 onto, eventually, but at the moment I’m just trying to keep 2019 up to date. It’s very much a work in progress. Do go and check it out though.